I hope you all have had a great weekend, can you believe it’s already summer!?

I’m doing something completely different but I just love this post so much that I’m reblogging it!

Speaking about puppies and doggies, here’s a shout out to Dog Product Picker! Your one stop online store for doggie products!

A couple weeks ago I was lucky enough to go to BlushCon 2018. It was part of the Asian American Expo, and it was probably one of the biggest expos I’ve been to.

As I was browsing BlushCon, I came across a booth: Nail & Bone. First thing that came to my mind was it must be a nail polish brand that has to do something with dogs. I was right!

Nail & Bone is a nail polish company that gives 20% of their proceeds to pet rescue and adoption centers such as SPCALA  Friends for Life, Best Friends Animal Society and Greater Good Animal Rescue.  My heart jumped a beat when I learned about it.

The cutest thing about this company is that all the shades are named after famous influential people’s dogs! Ellen has one and even Halle Berry! Look at that puppy trademark!

The shade I’m wearing is Nimbus which looks great on an accent nail and if you’re feeling daring you could even use Nimbus as a multi-color glitter top coat. I used Julep in Jet as the base coat. 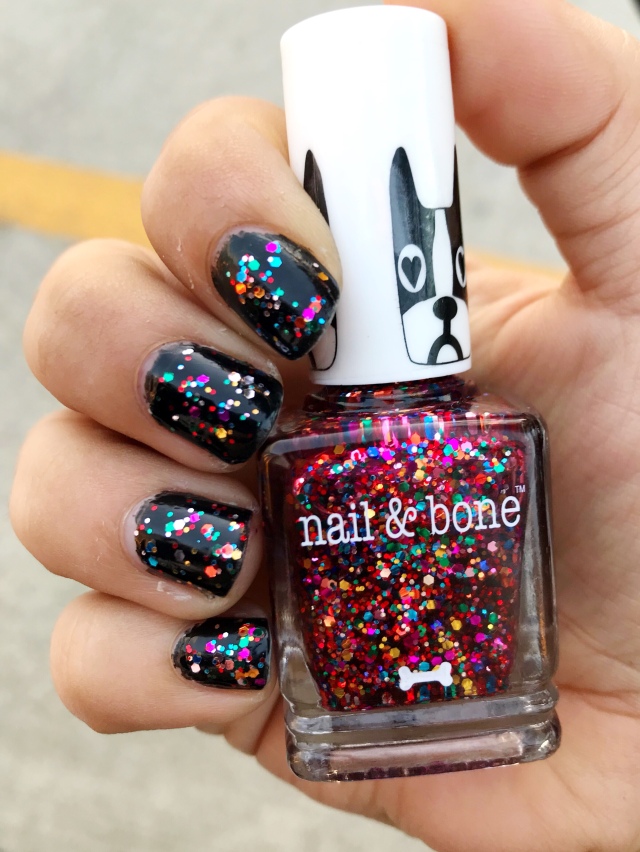 Did you want to know who owns this adorable Mini-American Eskimo dog? I’ll give you a hint: her first YouTube video was an Avatar Naa’vi makeup tutorial. She became a viral sensation and has more than 4.5 million subscribers. Last but not least, she’s well known for her transformation videos. Any ideas yet??….

Btw: She actually did transform herself to Nimbus, his reaction was just too adorable! Check it out here!

I hope you had a great weekend. Is it just me or is this month just flying by?! We’re already half way done with March!

Don’t you love it when you get an unexpected ExtraCare Rewards from CVS? I had a $3 EC Reward and eventually picked 2 Pop-Arazzi nail polishes. 2 for $3, I mean why not? I didn’t even have to pay for tax! lol

Today, I’m wearing Pop-arazzi in the shade “Mink It Over”. It’s a simple gray shade that works with literally every season! 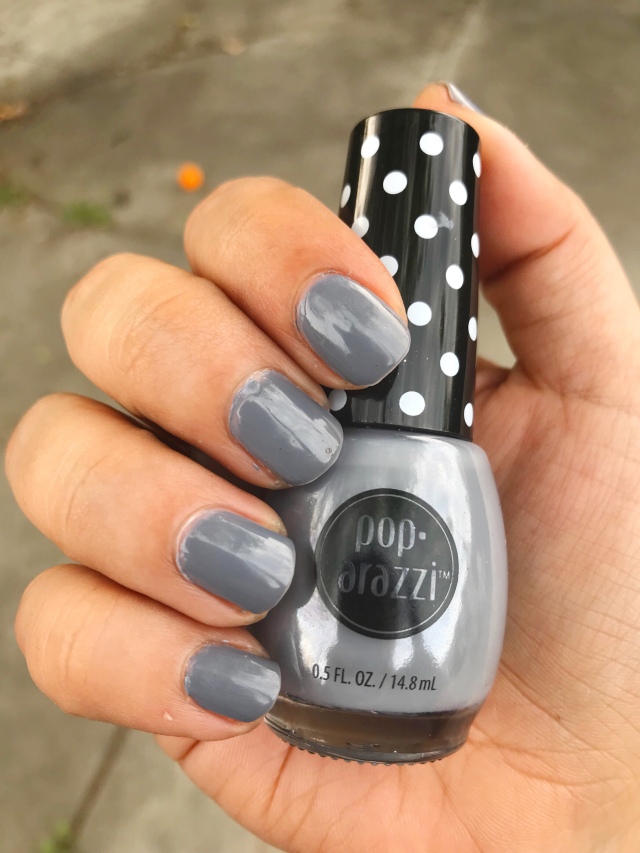 What do you guys think?

Hope all had a great weekend. 🙂

Did you know that CVS now sells CND Nail polish?! Well, I first saw it a few months ago but finally purchased a polish to see if it was worth the hype. Let me tell you, there’s a ton of shades of these polishes! It costs $10.50, a little expensive then usual but hey, you know I just love trying new polishes. 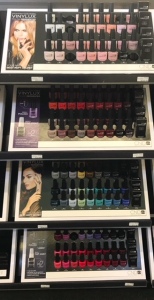 I got the CND Vinylux Weekly Polish in the shade Dark Lava. It’s a shimmery dark purple with a red tone and also a bit opaque.

I think I’m a big fan of wine colored polishes for the most part!

What do you think? 🙂 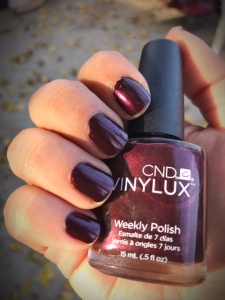 Can you believe we’re only 2 weeks away from Christmas!

I’ve been in the mood for darker nail polishes since Christmas are coming up! So then, I opted for Revlon ColorStay in 270 Stiletto. It’s a beautiful black cream polish which works perfectly for the holidays, especially if you add an accent nail with a glitter top coat.

What do you guys think? Any other nail polishes I should look into? 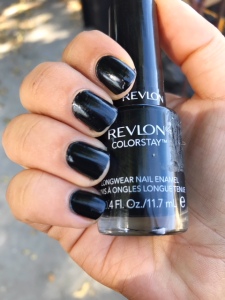 Hope you all are recovering the Daylight Savings change. I feel like a zombie at the moment! Am I the only one who feels that way? lol

I’m back after a little hiatus with a new Mani Monday special! Since we are getting into the fall season, I opted for a dark metallic cobalt blue from Seche Premier Colour sold at Sally Beauty. I got it for under $2 in the clearance bin! FYI: Always look for the clearance items at Sally Beauty, you’d be surprised!

This is called Ambitious and I just love the way the blue stands out, it’s a great color for fall! 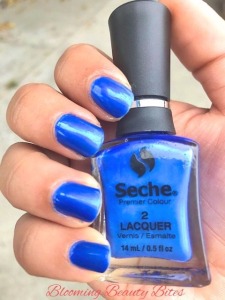 We’re finally in October! You know what that means? It’ll be a few weeks till my birthday! 😀

Be on the lookout for some birthday posts and tips!

I was at Sally Beauty a few days ago and found this beautiful Seche Premiere shade in the clearance section. You’d be surprised what you’d find in those clearance bins!

It’s an intense magenta shade with a duochrome of pink and very light sparkle. I needed a change from all the metallic shades I’ve been wearing!

So what do you guys think?! 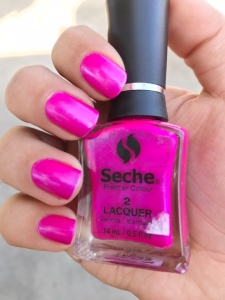 I hope you all had a great weekend! Sorry, I’ve been somewhat MIA, it’s been a bit crazy here.

I was at Target a few weeks ago and came across Target’s new nail polish line: Defy & Inspire Wear Resistant Nail Lacquer! I normally don’t spend $7 on nail polish but I realized I needed to try this brand let alone the shade.

A little about Defy & Inspire: Their motto is “Beauty is our Responsibility”. Defy the Ordinary. Inspire the Extraordinary. It’s one of those new brands of nail polishes that have 5 Free: No DPB, Toluene, Formaldehyde, Formaldehyde Resin or Camphor. I only know about the first Formaldehyde! lol

Target did a great job designing a nail polish brand! I mean have you seen the intensity of this “Moon Dust”?! According to Target’s website, it’s considered a metallic finish and metallic color palette. In my opinion, it’s a mix of sparkly baby blue, light purple with duo-chrome glitter. I topped it off with Revlon’s Gel Envy Diamond Top Coat, hence that strong sense of shine. 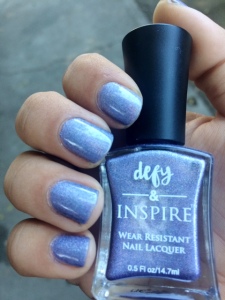 What do you guys think? Have any of you tried Defy & Inspire?

Hope you all had a great weekend! Everyone going through natural disasters: you’re in my prayers! ❤

I’ve recently have been interested in more metallic nail polishes and now I can see why!

This one I’m wearing is Pop-arazzi in Bronze Metal. I’ve applied 2 coats and I like it, it’s not overly bronze and an even shade. I see it more of a rose gold but either way, I love it! 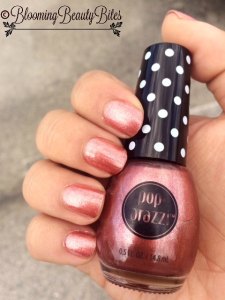 Hope you all had a great Labor day weekend here in the states!

I’m so happy that autumn is coming closer which means more sweaters, amazing fall colors and our most loved flavor PUMPKIN SPICE!!

I realized Sally Beauty, TJMaxx and Target are my guilty pleasures! I just can’t come out of those stores without buying something.

I went to Sally a few weeks ago and went straight to the clearance section since I’ve fallen in love with the Seche Premiere polishes. I found them again and bought 2 and it was an extra 50% off. You can’t go wrong especially if I only paid $1.18 for each!

Here, I’m wearing Seche Premiere in Gifted. From the bottle, it looks like a rich ruby red but as you can see, it looks more like a ruby pink red shade. Either way, I love it! I applied 2 coats and topped it off with Revlon ColorStay Gel Envy Diamond Gel Top Coat. 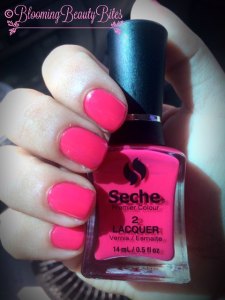 Hope you all enjoyed your weekend and keeping cool in this heat!

CVS has been having this crazy deal for 2 weeks now and I wanted to let you guys in on it.

Buy 2 Pop-arazzi nail polishes and get $4 back in Extra Reward Bucks. If you’re paying $2.99 for each, you’re basiacally buying it for only a dollar and change!

I dont know about you, but I like trying out new affordable nail polish!

I’ve lately been getting into metallic lately especially that autumn is coming soon! 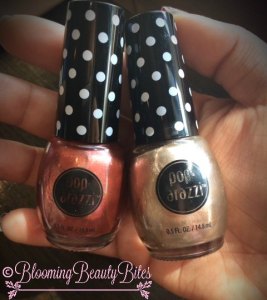 “Destiny is always a matter of choice, never a mater of chance.” Viktor and Rolf came out with a new fragrance: Good Fortune. Jasmine super infusion, fennel & gentian flower and Bourbon Vanilla. This scent can last on for days! I was lucky to find a pop for this scent a few weeks ago in Santa Monica. Lots of photo opps, a complimentary tarot card reading, a photo booth, samples and complimentary 1oz bottle! #viktorandrolf #goodfortune #santamonica #sundayadventures #popupevent #fragrances #bourbonvanilla #jasminesuperinfusion #fennel #gentianflowers #lifestyle #beauty #freebies #weekendevents #createyourgoodfortune #viktorandrolffragrances
Happy National Ice Cream Day!! Did you know that Crystal Creamery is California’s oldest diary since 1901! Ice cream is made with 100% California milk that comes from local and family owned farms. The best thing is that there is 29 flavors so far!! My favorite is the tin roof Sundae with ripples of fudge and chocolate covered peanuts. #nationalicecreamday #crystalcreamery #summertreats #icecream
Happy 4th of July everyone! #happy4th #july2022 #redonred #curlyhair #newmakeuplook #happyanniversary #colourpop #revlonultrahdmatte #berry #appetizers ##keto #weightloss